TOKYO — The service of renting batteries to charge smartphones has taken off in Japan recently.

Battery rental machines are an increasingly common sight at train stations and convenience stores in this country. The startup that leads in the service imported the entire business model from China.

Stephen Chan, founder and chairman of Inforich in Tokyo’s Shibuya Ward, said he learned about the service in Hong Kong in June 2016, when a friend and entrepreneur from mainland China told him about it. Hong Kong is his father’s homeland, where Chan, a Japanese citizen who has permanent residency in the territory, was operating a different business at the time.

“The [smartphone battery rental] business made very good sense to me,” Chan said.

Research company iiMedia Research forecasts users of battery rental services, the first of which was introduced in China about a year ago, will total some 229 million in 2020. The number is down from a year ago due to COVID-19 lockdowns, but the services have grown into a key infrastructure that supports China’s smartphone economy, which includes such services as QR code payments.

With the new business idea, Chan initially approached major Chinese players to propose a tie-up to operate their services outside China. He tried to convince them their service could work in Hong Kong or Japan, but failed to agree on specific terms. Just as he was deciding to go it alone to launch a business, he found a Hong Kong startup that had developed a battery rental machine in November 2017. He immediately bought the company and launched the service in April 2018 in Japan. 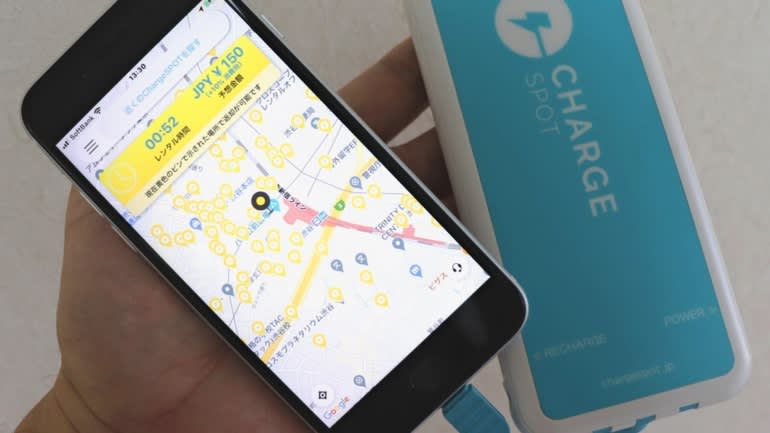 To use the service, named Charge Spot, the customer needs to download an app onto a smartphone. The nearest machine can be located using a map on the app. The smartphone scans the QR code on the machine, which dispenses a battery unit. The fee of 150 yen per use of less than an hour is charged electronically. This process is the same as those used in China.

There are now 21,000 Charge Spot rental machines in Japan. Rival services have emerged, including one operated by Tepco Energy Partner, but Charge Spot commands a market share of over 90%. Inforich expanded the service to other parts of Asia, installing 3,000 machines each in Hong Kong and Taiwan and 1,000 in Thailand. In December 2019, the company raised 3 billion yen ($27.5 million) from Goldman Sachs Group and other large investors.

The approach adopted by Chan in launching Charge Spot embodies what SoftBank Group Chairman and CEO Masayoshi Son called the “time machine” strategy. Under the strategy, a new business model in more advanced countries is later transplanted to other countries. Son argues the strategy increases the chance of success. What sets Inforich’s case apart is that it took a business model in China and brought it to Japan, instead of using U.S. businesses as models, as Japanese companies have typically done in the past.

The types of businesses in which Chinese companies excel have proliferated over the past four to five years. These include businesses based on the sharing economy model, such as home delivery and bicycle rental services, as well as smartphone app-based services, such as video-sharing platforms. The era in which Japanese entrepreneurs copy business models from China has arrived.