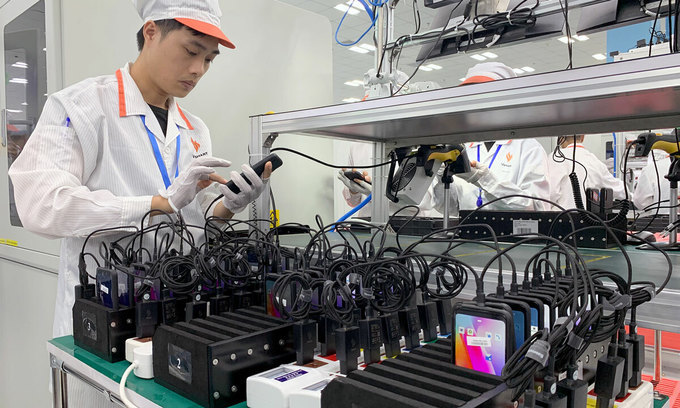 Le Thi Thu Thuy, general director of VinSmart, without identifying the U.S. company, said Thursday at a press conference that the first consignment was sent a month ago. The phones carry the American service provider’s logo.

“This is an important step in understanding the U.S. market… before taking Vsmart phones there in future,” Thuy said.

The U.S. company has such stringent standards that despite having a team in Vietnam to supervise the VinSmart factory 24/7, it still thoroughly inspects the phones once they reach the U.S.

The contract is for four models, all of them supporting 4G.

A confidentiality agreement prohibits VinSmart from disclosing the name of its partner.

VinSmart has a plant for manufacturing 125 million phones, IoT devices and other smart devices per year at the Hoa Lac Hi-Tech Park in Hanoi.

The brand is currently sold in three countries, Russia, Myanmar and Spain, but the company expects to sell its Aris 5G in the U.S. by next year.

VinSmart had a 16.7 percent market share in the first quarter, and surpassed Apple to become the third largest smartphone brand in Vietnam behind Samsung and China’s Oppo.