Technology’s future is inspired by science fiction. Today’s voice-based digital assistants draw their lineage from HAL, the talking computer in “2001: A Space Odyssey.” The Apple Watch, with its built-in cell phone, looks a lot like the two-way wrist radio from the classic “Dick Tracy” comic strip.

Back in the late-1990s, I interviewed executives from Palm, who told me they based the design for the Palm Pilot on the communicators from the original “Star Trek” series. The only reason it had a flip-down plastic cover for the screen was because Capt. James T. Kirk looked cool flicking his communicator’s cover up to start a conversation.

You may now be able to glimpse the future of smartphones by watching “The Expanse,” the hit TV series streaming on Amazon Prime Video. Set hundreds of years in the future, when humans have colonized the solar system, its characters communicate in the most intriguing ways using what they call hand terminals – transparent slates of glass that change shape, interact with other devices and can work in the deepest reaches of space.

At the same time, the devices are very familiar to our 21st century eyes, and when you see them, you will want one.

“The Expanse” is a must-watch if you enjoy smart science fiction. It’s based on a series of Hugo Award-winning books by James S.A. Corey, which is a pen name for co-authors Daniel Abraham and Ty Franck. The show debuted in 2015 on the Syfy cable channel and ran for three seasons there. It moved to Amazon Prime for season 4, which was released last December, and now all four seasons are available for your binging pleasure there.

One of the things I love the most about “The Expanse” is that its technological marvels are taken for granted by its characters, who use tech as casually as they wear clothes, and that includes the hand terminals. You don’t get the feeling these folks lust after the latest model.

“That is one of the things I loved about the books,” Naren Shankar, showrunner for “The Expanse,” said in a phone interview. “In the books, when describing the hand terminals, you may as well be describing a wrench. For most people, it’s just a very simple tool they use that does everything.”

LEFT OUT: New smartphone? A charger may not be in the box

Shankar, who has degrees in physics and electrical engineering and describes himself as “a detail-oriented guy,” helped turn the hand terminals from vague descriptions in the books into one of the coolest aspects of the show’s tech. He has a storied career in television, having written for “Star Trek: The Next Generation” and served as a co-showrunner for “CSI: Crime Scene Investigation,” at one point the most popular show on network television. 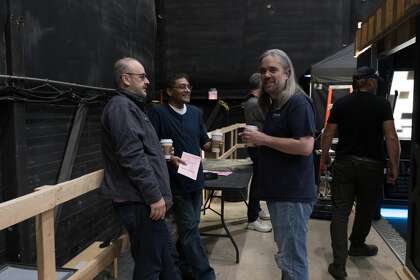 Besides “The Expanse,” he’s also the showrunner for “For All Mankind,” the alternate history of the 1960s space race in which the Russians get to the moon first. Much of that show on Apple TV+ is set in Houston.

Shankar said he and the prop crew initially struggled with the design of the hand terminals. Concept drawings, prototypes and working props all “came out looking clunky.” He finally found his inspiration in the final episode of a very different kind of TV show: NBC’s “Parks and Recreation.”

“At the end they do a flash-forward to several years in the future, and they show the characters with really cool smartphones that did all these things,” he recalled. “I really liked the way they looked, so I took a clip from that show to the prop guys and said, ‘Our hand terminals must not be less cool than this.’”

Most of the hand terminal props on the show are just clear plastic slabs, with the display added later by the special effects team, Shankar said. Onscreen, they have have video displays that morph depending on their functions. When viewing something that requires a wide angle, the top screen expands into a horizontal display, then slides back into the slimmer design for other functions. 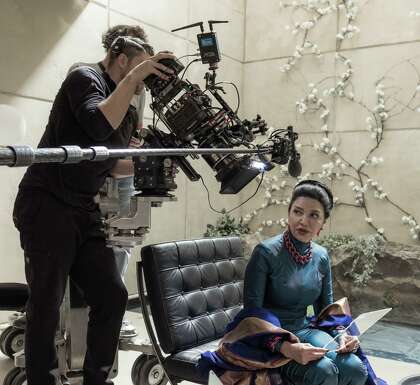 The display is transparent, so you can see what’s on the screen even if the back is pointed at you – which drove me crazy when I first saw it because of the obvious privacy problem. Shankar said it’s bothered others, too, and they have changed it in later episodes so that the display blurs if the owner of the terminal is not the person looking whose eyes are on it.

The terminals appear to be inexpensive devices, and maybe just as prone to damage as smartphones. One of the characters on the show, a classic hard-boiled detective named Miller working in the asteroid belt, carries a hand terminal with a perpetually cracked screen. In the fourth seasons, refugees spirited away from a ruined colony on the Jovian moon Ganymede are each given refurbished hand terminals so they can communicate with their families.

Hand terminals understand the context of gestures and the environment they’re in. For example, you can share information from your terminal to someone else just by gesturing across the screen and then at the other person. The same effect works if you want to send the display to a TV mounted on the wall. Smartphones can do this now, but it takes several steps and doesn’t always work smoothly.

Each season, the terminals get refined even more. Season 5 has finished shooting, and now the special effects team is having its way with the production, adding the tech that makes the show so much fun. Shankar would not say when Season 5 will premiere, but it’s coming soon. I can’t wait.

345 thoughts on “Want to see the future of smartphones? Watch ‘The Expanse.’ – Houston Chronicle”